Thoughts on the Market: May Edition

Volatility continued in May, with markets falling as much as 7% in the first 11 days of the month before rebounding by month-end.

For the first time, we witnessed the true inflationary effect on earnings as Walmart and Target severely missed earnings projections despite sales being in line with expectations. Looking beneath the hood, both retailers experienced product inventory issues that led to lower sales productivity which explains why Home Depot and Costco, which have better inventory assortment, were able to grow profitability. The same product-led dynamic can also distinguish retailers like Lululemon and Aritzia, who see continued growth in sales, from fledging competitors like the Gap and Abercrombie, who are overstuffed with unwanted inventory.

Energy prices continued their climb, with both oil and natural gas prices reaching multi-year highs (Figure 1). Rising energy prices now represent the largest risk to economic growth. End market pricing for products like gasoline and jet fuel has been further exacerbated by a global shortage of refining capacity. Small incremental improvements in fuel efficiency may be able to keep a cap on prices, but a larger production response is needed to reduce the inflationary effects on households. 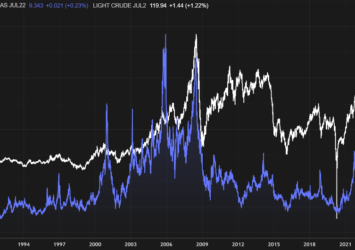 We note that valuations have trended back towards ranges that existed when interest rates were between 4-5% in the mid-2000s (Figure 2). It is likely that we will see some additional upward pressure on interest rates, but the market may hesitate to cut multiples further given a well-telegraphed and aggressive Federal Reserve, the onset of quantitative tightening and the slowdown in hiring intentions. 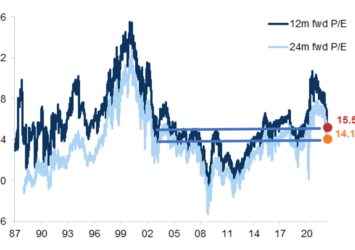 We still see current inflation rates as consequences of COVID lockdown-related decisions by governments and corporations, and believe long-term drivers (namely anemic economic growth, technology-led productivity, demographics, and excess bank reserves) are deflationary. There is no shortage of commodities in the ground and, historically, these cycles resolve themselves. That said, economies are moving into a phase where services will over-index versus goods, and it may take another 12 months for these factors to normalize. As we are witnessing with goods at Walmart and Target, there is never enough supply until there is too much.

During the month, we initiated a 2% position in Starbucks (SBUX). Long-time Starbucks leader Howard Schultz has returned as interim CEO until next March, helping to reinvigorate the company and provide leadership as it faces unionization pressure in the United States and Covid lockdown closures in China. With ambitious growth plans in China, sales should pick up as the country reopens and 400 new stores are rolled out by the end of the year. Starbucks is also investing into its profitable drive-thru business. More drive-thru locations are opening, and Starbucks is optimizing the customer experience at each touch point to drive incremental profit north of $500 million.

We also added a position in BP PLC (BP), a globally diverse energy company with business across each continent. BP has both Upstream, including oil and gas exploration and production, and Downstream, marketing and manufacturing, segments. Current and near-term strength in energy markets supports high oil and gas prices and free cash flow generation as BP trades at a next twelve month 18% FCF yield. BP has also clarified its strategy for transitioning into renewables, hydrogen, biofuels and EV offerings, which will comprise about a quarter of EBITDA by 2030.  Selling at a cheaper multiple, with similar operations and an energy transition plan, BP is currently a better investment than Chevron.

To fund our purchases we sold our positions in Chevron (CVX) and Dollar Tree (DLTR). Although Chevron remains a major player in the energy industry, its 8% FCF yield looking forward to the next twelve months makes it more expensive than BP Oil.  We recently sold Dollar Tree on its strong relative outperformance and margin expansion. The market has responded strongly to an accelerated pricing strategy and an activist investor, but we sold our position as the shares approached our target price.

We made no changes to our portfolio of companies during the month.