Thoughts on the Market: September Edition

We are currently in the midst of a minor correction, with the S&P 500 down 6% from its high on September 2, 2021. This is the first test for investors since the since the fall of 2020, when the market sold-off 9% ahead of the U.S. Federal Election. The tweet below from finance writer Morgan Housel sums up our feelings more eloquently than we could. 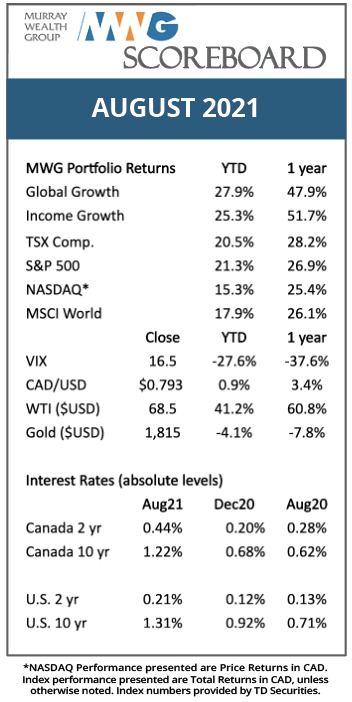 Markets go up, markets go down. There is usually a reason or two, but overall, they go up unless there is a significant event that impairs long-term earnings potential. We can reframe the concept differently. As of September 30, the S&P 500 was up 14.7% year-to-date. If you went on vacation to a remote area for the 9 months (between January 1 and September 30) and only checked your account statement before and after your holiday, you would be happy with the 14.7% market move. You would not be aware that the market’s return at its September 2 peak was 21%. It would seem silly to hold a strong conviction that the market level was 6% too low, even though your return would have been 6% higher had you taken an 8-month holiday instead.*

That is not to say market forces will not benefit some sectors over others. As we move forward, interest rates will likely grind higher from unusually low levels (the range from 2012 to 2020 was 1.5-3.3% for the U.S. 10-year bond), benefiting financials but negatively affecting long-duration growth stocks. Commodities are better positioned, with a muted supply response following a decade of underinvestment. Automakers and component companies should benefit from pent-up demand as supply challenges ease in 2022. The aerospace industry is on the cusp of a new aviation cycle, with growth increasingly coming from developing nations.

*Of course, the whole exercise is rhetorical. Nobody was going on holiday on December 31, 2020 due to lockdowns.

We made no additions or deletions to the portfolio during the month.

During the month, we initiated a position in European Residential REIT (ERE). ERE owns 6,000+ rental apartment units concentrated in the Netherlands. There are two key points that attracted us to the trust. The first is very low mortgage rates in the eurozone as evidenced by ERE’s 1.6% weighted average mortgage rate. The second is the potential rental rate uplift as units are turned over. Dutch rent control regulations cap rental rate growth (the exact allowable increase depends on whether a unit is regulated or liberalized) and the amount of capital invested in the unit. While the pandemic caused a freeze in rental rates to help stabilize the Dutch economy, the allowable rental increases will continue to accrue to the company upon turnover of a unit. Thus, ERE will realize a 17% uplift, on average, when a new tenant moves into a unit, compared to 7.7% prior to the onset of the pandemic. All told, we expect ERE’s funds from operations to grow at a faster rate post-pandemic. Given that the shares trade at a lower price despite prospects for higher cash flow per unit, we believe the units will deliver attractive returns.