The Ukraine Invasion, History and the Stock Market Impact

This war is a human tragedy and breaks the world order that has held since the end of WW2, as did the Korean War and Vietnam War. All these wars were fought on the edges of the East/West political divide.

Ukraine has been part of the East for all of modern history until the removal of the last Russian puppet president, Viktor Yanukovych in 2014. Restoring a Russian puppet has been Putin’s focus for the last decade. His population is also suffering from a rapidly declining standard of living, and he must distract them. Russia spends 4.3% of its GDP on the military, the third-highest globally and ahead of the U.S at 3.7%. This has punished the population’s standard of living. Guns or Butter is the economic expression for this and refers to a governments’ allocation of military spending versus civilian spending. Putin may end up like Gorbachev, with an economy crushed by military spending and a very unhappy population. Putin’s only hope is Vodka and its tempering the enthusiasm for protest. Putin does have higher oil prices, decent foreign reserves and perhaps a supportive China on his side.

Ukraine is not closely tied to the West economically; Ukraine and Russia are not economically important to the stock market. Russia’s GDP is smaller than Canada’s. Russia’s GDP is $1.4 trillion, Canada is $1.6 trillion, the GDP of Ukraine is $156 billion, Iowa is $170 billion, Saskatchewan has a GDP of $44 billion, Manitoba is $60 billion. So, Ukraine is 1/3 larger than Manitoba and Saskatchewan, combined. Ukraine has 44 million people versus Manitoba plus Saskatchewan at 2.5 million. So, they are 20 times as productive as Ukraine per capita.

This war will not likely affect the West’s economy particularly and Canada will likely benefit as supplies of Russian oil, metals and Belorussian potash are reduced or cut off from western markets. Lower Ukrainian wheat exports will also benefit Canada.

It is also likely military spending will rise in the west, particularly in the NATO countries bordering Russia and Ukraine. Russian controlled outlier territories between Poland and Lithuania and in Moldova may be used to threaten more of Eastern Europe.

Western GDP growth is still very likely to be strong for the next several years as witnessed by the 7% growth in the most recent quarter. Catchup from the covid shutdowns and shortages of consumer durables and a travel recovery will supercharge this growth.

How Do Markets React to Crisis?

Even though all events are created differently, we can learn from how markets have reacted historically to a crisis. Figure 1 below shows the 1-day move of the S&P 500 after the ‘event’ followed by several other metrics. The median ‘Days to the Bottom’ is 6 and the median Days to Recover is 17. There is something to be said for “markets have already discounted this”. Figure 2 shows how the S&P has reacted over the next 3,6 and 12 months (slightly different event basket). In 16 of the 18 events listed, the S&P 500 was up over the next 12 months. 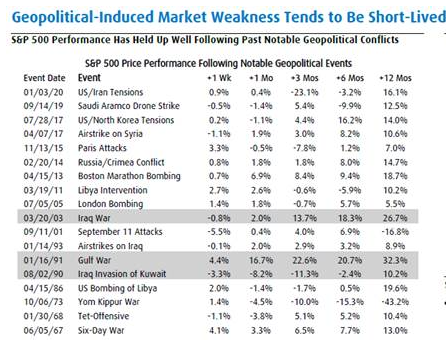 A new cold war has emerged. It’s unfortunate, but wars are often good for stock markets. This war will focus the west for many years on diminishing Russia back to the level it was in the pre-Glasnost period.

We believe the issues bothering the market are: higher rates, inflation, valuation and Putin…. will be digested very quickly, Putin has made his move, the bond markets have risen, at least somewhat discounting the coming “Fed” and other Central bank moves. Inflation remains an issue that may be further aggravated by economic sanctions against Russia. We continue to believe most of the current inflation is transitory due to the economic fallout from Covid shutdowns and labour shortages.

The purpose of this is to provide insight into our portfolio construction and how our research shapes our investment decisions. As always, we welcome any feedback or questions you may have on these monthly commentaries.