Thoughts on the Market: November Edition

As inflation surged in early 2022, central banks around the world began raising interest rates to slow economies and combat higher prices. We will focus on the United States and The Federal Reserve (the ‘Fed’) in this report as the U.S. dollar is the world’s reserve currency, and thus, the Fed’s policy is the most influential on financial markets. The rise in overnight rates (known as the Federal Funds Rate) from essentially nil to 3.78% has been the sharpest in absolute terms in the past twenty years and is even more dramatic when considering the effect of duration* in a low interest rate environment (Figure 1).  Fed Governor Jerome Powell is planning additional increases to bring the rate above 5% in 2023.

The overnight rate is the rate at which the Fed lends to other banks and its most controllable rate. Other rates such as government bond yields or fixed mortgage rates are determined by the market rather than the Fed.

For example, the 10-year U.S. Government bond yield is determined by market forces such as investor demand, new issuances, inflation and interest rate expectations and currency exchange rates. Simplistically, a borrower needing a 10-year loan can either lock in at today’s rates or borrow short term at the overnight rate, with the bet that the daily fluctuation in rates will provide a lower cost over time. Thus, the further out from the 1-day overnight rate you go, the more long-term market expectations factor into rates as opposed to the overnight rate. This is demonstrated by the U.S. government bond yield curve (Figure 2). Note shorter term rates are closer to the overnight Fed Funds Rate (they actually reflect further increases in the next six months to >5% currently, with the next increase likely coming next week) while long-term rates are market-based. 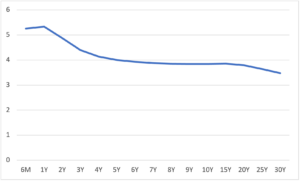 We should probably place an asterisk next to market-based because there is a way for the Fed to impact longer-term rates through intervention known as quantitative easing/tightening. In the rubble of the 2008 Financial crisis, the Fed began buying government bonds as a response to U.S. Government bank reform in order to inject liquidity into the economy. The same tool was used in response to the COVID-19 pandemic. The Fed is now reversing these bond purchases and reducing its bond portfolio (which puts upward pressure on market-based interest rates). Since its April 2022 peak of $8.96 trillion, the balance sheet has declined by nearly $400 billion to $8.58 trillion. It will continue declining by ~$95 billion per month until the Fed decides otherwise (Figure 3). 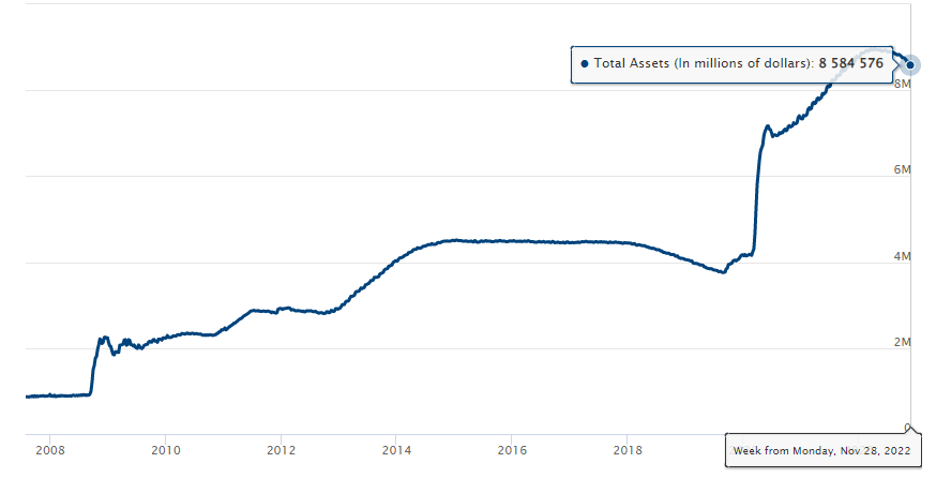 Thus, we are at the maximum throes of the U.S. Federal Reserve as it attempts to bring down inflation. However, long bond yields have been trending lower for the past two months, with the 10-year rate down from a high of 4.3% in mid-October to the 3.5%-3.6% range. The drop corresponds to a decline in core inflation expectations as rents, medical services and auto prices decline. By all accounts, the prices of these items continue to trend lower. This is further supported by a continued moderation of transportation and energy prices as evidenced by gasoline prices, which should be lower compared to last year as we enter 2023. Moreover, Purchasing Manufacturers Indices are highlighting a slowdown in new orders and investment and most agricultural commodities have been moderating.

The labour market and its associated wage inflation continue to be Powell’s toughest challenge, and although anecdotal news flow is indicating more layoffs, jobs data continue to be robust. Until headline inflation and wage growth slow, Powell will keep his tough-talk stance on interest rates. However, there is more evidence that the market is telling the Fed that rates will need to be lower, and unless new datapoints emerge indicating that high inflation will persist into the second half of 2023, we believe the high for long-term interest rates has been set. If that turns out to be correct, several strained sectors,  such as real estate and fixed income markets, will see the opening of relief valves.

During the month, we made several changes to the portfolio. We purchased AT&T (2% weight) as an attractive global play and replacement for Comcast, which was sold. AT&T is a much more resilient company after spinning off its Warner Media division and now focusing solely on telecom and wireless services.

We also switched out of Bank of Nova Scotia into Bank of Montreal (2% weight). We like BMO’s U.S. banking platform and feel that the change of Scotia’s CEO may lead to some short-term volatility. Note that we continue to hold Scotia in our dividend fund as its tax position and dividend yield (6%) warrant holding it in that portfolio.

We also added shares of Qualcomm (1% weight) as its leadership in 5G wireless and auto semiconductors provides attractive long-term growth. The shares have pulled back from highs on oversupply concerns, and while it will take 6-9 months for inventories to find equilibrium, semiconductor stocks typically bottom well before earnings estimates and the stock trades at an attractive 12x P/E on mid-cycle earnings. We sold our position in Twilio to fund our purchase of Qualcomm.

The MWG Income Growth Fund rose 6.6% in November, slightly greater than the 5.3% increase in its benchmark. The Fund is up 5.3% year-to-date versus the benchmark decline of 2.3%. Rio Tinto (+28%), Chemtrade (26%) and European Residential (17%) led the portfolio, while Northwest Health Care (-5%), Canadian Natural Resources (-2%) and Blackstone (flat) were the top detractors from performance.

We made no portfolio additions or subtractions in this Fund during the month of November.