This is the fourteenth in a series of independent research produced by the Murray Wealth Group Research Team. The purpose of this series is to provide insight into our portfolio construction and how our research shapes our investment decisions. We welcome any feedback or questions you may have on these monthly commentaries.

This piece is written by our CEO and CIO, Bruce Murray.

While the American stock markets have recently broken through to all-time highs, we continue to see prognosticators fighting for seats atop the ‘Wall of Worry’.

“This is the longest economic expansion in history.”

“We are at full employment; therefore, inflation must be just around the corner.”

“The tariff wars have killed trade.”

On the other hand, Larry Fink of Blackstone believes that the U.S. public is underrepresented in equities despite the solid liquidity of the U.S. consumer.

The Fed is Confused

We know that the voting members of the Federal Reserve Board’s Open Market Committee must be having a difficult time. The Fed’s interest rate decisions are data driven, and the data has been noncommittal at best. As stock markets rallied off indications of 3.2% economic growth in the first quarter of the year, Fed watchers started to speak about the potential for higher rates. Then in March, interest rates went into a steep decline when data indicated that the economy was slowing. The yield on 10-year US treasury Bonds fell from 2.77% on March 4th to 1.94% on July 5th as numerous economic indicators began to signal the need for caution (see chart below). Both the Purchasing Managers’ Index (PMI) and industrial production declined during the spring and the early summer. Major companies were moving production out of China due to both cost and politics. While I have no statistical evidence, I assume companies-built inventory in preparation for the move.   Thus, rail shipments were weak in Q2, lending further support to the bears. 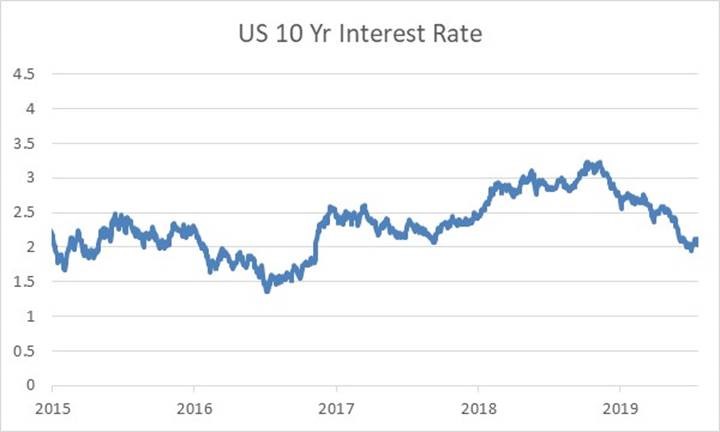 At the same time, we are also seeing some indication that the economy may be strengthening.  An example can be found in the Baltic Dry Index.

The BDI is the world’s proxy for dry bulk shipping stocks as well as a general bellwether of the shipping market. It is a measure of cargo volumes on the high seas, which are obviously very sensitive to economic conditions. According to this indicator, the next few months look bright to. We believe some of the strength has come from production that has moved from China into new countries that are starting to pick up volume. 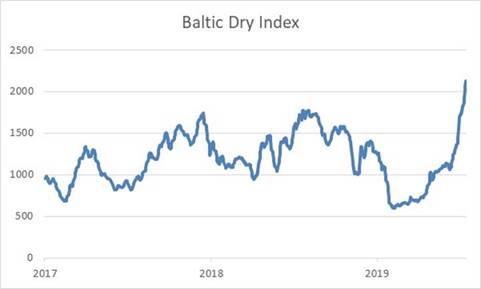 “The Cloud” You Go Microsoft! You too Big Blue!!

Last week, investors reacted positively to the earnings reported by both Microsoft and IBM.  Earnings were buoyed largely by a move, on the part of their clients, to the cloud (i.e., off-premise outsourced management).  Microsoft is experiencing an acceleration in its revenue and profit growth as a result of its Azure product line and the move of its office products to a monthly subscription. The stock has already tripled in the last 5 years and looks capable of moving much higher still.

IBM, on the other hand, which has seen its stock drop by some 25% over the past five years, sprang to life and rallied $10 on unanticipated strength in earnings.  While IBM’s revenues fell 4.2% due to weakness in its legacy businesses, its very profitable cloud business led to a 4.6% rise in earnings.

At TMWG, we own both stocks. Microsoft, in which we have a 4.5% weighting, remains one of our top three holding in the Global Growth Fund. IBM was recently added to the Income Growth Fund based on its  4.6% dividend yield at the time of purchase. Amazon, the dominant cloud services player and Global Growth Fund holding, reports this week. 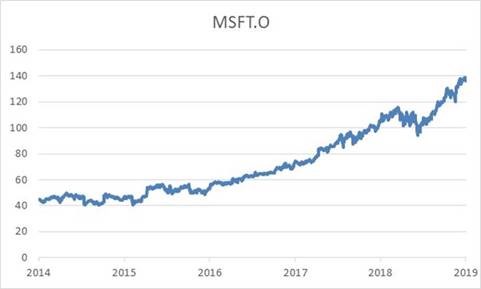 The gold price moved to a 5-year high recently, I suspect in reaction to the belief that U.S. interest rates will be cut once again.  Moreover, with yields around the world being where they are, the cost of holding gold versus money market instruments is quite low. Gold may be also drawing strength from the news flow around Bitcoin and Facebook’s new Libra currency that has dominated the business news recently. Gold typically performs well when real interest rates (nominal rates less inflation) are negative and as nominal rates remain negative in some countries, we could see further strength in gold. 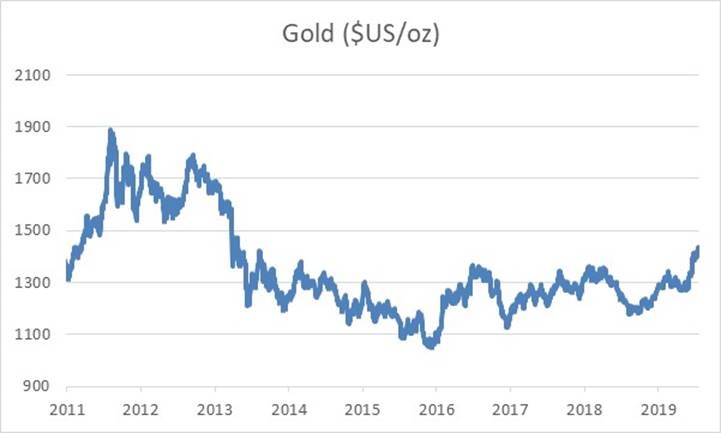 We continue to believe that the “goldilocks” economy will last for a significant period of time yet, driven by the massive move to higher productivity through the application of technology. This makes most of us wealthier as prices are constrained and higher value-added jobs are created.  However, the increased attention being paid to societal trends and of the extended nature of the business cycle are punishing consumer cyclical and industrial stocks such as autos and retailers.  We will continue to keep our portfolios focussed on companies leading the transition to a more technology-enabled economy while de-emphasizing those companies that are not benefitting from this shift.