This is the thirteenth in a series of independent research produced by the Murray Wealth Group Research Team. The purpose of this series is to provide insight into our portfolio construction and how our research shapes our investment decisions. We welcome any feedback or questions you may have on these monthly commentaries.

This piece is written by our Head of Research, Jamie Murray.

On May 31, The Wall Street Journal broke the news of the opening of an investigation into four of the most prominent technology companies: Alphabet, Amazon, Apple, and Facebook. The action is bi-partisan supported and thus ‘big tech’ won’t be able to lean on its friends in Washington for sanctuary. We own positions in all four companies in our Global Growth Portfolio as we are attracted to the technology sector’s appealing fundamentals (secular growth, strong margins, low capex/high cash flow). As owners, we are keenly interested in gauging the likely outcome of each company’s investigation and determining the risks and opportunities available.

We do not believe the market was surprised by the news, although the uncertainty did weigh on share prices. The topic of antitrust has emerged as a key platform issue for several Democratic Presidential nominees and each of these companies has faced similar scrutiny in the past. A key difference with this round is that it appears to be motivated by the absolute size of each company (and the industry as a whole). Before diving into each company, we’ll provide a brief overview of U.S. antitrust laws and the economic principles they serve to protect.

There are three main U.S. Antitrust Acts: The Sherman Act, the Federal Trade Commission Act and the Clayton Act.

Both the U.S. Department of Justice (DOJ) and the Federal Trade Commission (FTC) have the power to bring forth antitrust charges. According to reports, the FTC will investigate Facebook and Amazon while the DOJ investigates Alphabet and Apple.

Historically, antitrust investigations have targeted cohesive efforts to harm competition (such as bid-rigging) with a view of consumer harm (through less choice and/or higher prices). However, technology use and the advance of data as a currency is changing the narrative that consumers can only be harmed through price/selection.

Monopoly laws are often synonymous with break-ups, although only two large break-ups have occurred in U.S. history: Standard Oil’s break-up into 34 smaller oil companies in the 1920s and the breakup of AT&T into nine companies the 1980s. Microsoft narrowly avoided the fate in 2001 after an appeal overturned an initial ruling to separate.

In the latest investigations, we do not believe any of the companies we own are at risk of a break-up. However, from a value creation standpoint, break-ups can be accretive to shareholders as platforms like YouTube, Waymo and Verily at Alphabet would likely be valued at much higher multiples outside versus within a consolidated structure. There are other solutions that will likely be adopted instead:

We believe it likely that a combination of these three tools will be used.  In reviewing each company, along with our anticipated outcome, we note two caveats.  Firstly, antitrust investigations can take multiple years to play out and thus these investigations will likely overhang the companies (and sector) for some time. Secondly, we have are not concerning ourselves with potential fines that may be levied. Figure 1 highlights the projected cash balance and free cash flow of each company in 2021, the earliest a fine would reasonably be incurred. A fine in line with historical amounts (~US$5B) would be easily digested by each company. The investment community often sarcastically refers to these government fines as the cost of making too much money!

The DOJ is likely targeting Apple’s app store (which is also an issue with the EU for alleged anti-competitive behaviour). The app store is Apple’s gateway to services with Apple and third-party developers listing apps for download or purchase. Since Apple competes with these third-party developers (such as Apple Music competing with Spotify), Apple has incentives to coerce or force consumers onto Apple’s platform or charge prohibitively high access fees/commissions to competing platforms. The company is banking on services revenue as its key growth driver for the next decade as Smartphone demand matures globally.

According to Morgan Stanley, the regulatory action could cost US$3-13 per share depending on the outcome of any potential investigation.

There has been momentum among consumer advocates for regulating marketplaces and prohibiting the sale of the marketplace owner’s products. If Apple was forced to go this route and withdraw its own products, the lost revenue would represent US$3-9 per share.  It remains unknown, however, whether Apple would be able to sell off these assets, like Apple music, which would reduce the valuation impact. It also seems unlikely it would be forced to abandon its Apple TV+ (new streaming service) given the competitive landscape of streaming media.

Alternatively, Apple may be required to adjust its commission rate for third-party developers or make more of its underlying technology available to them.  If it was punitively required to drop the commission rate 50%, the impact on Apple could approximate $US13 per share.

Our take: Apple will likely agree to concessions, opening up its app store technology to third-party developers, somewhat levelling the playing field for competing services. We think the company should stand its ground on commission rates as these are high margin revenue items and a lowering of commission will increase pressure for additional decreases over time. Apple believes the app store is a significant benefit to app developers (without the app store, apps would be much more difficult to commercialize) and thus has a strong argument to set commission pricing.

The FTC is looking at Amazon and may broaden the scope to its investigation to the company’s overall business practices. Amazon has long been accused of undercutting pricing strategies and being a retail-killer. However, lower prices are good for consumers and antitrust laws are not designed to punish companies that can more effectively compete. Predatory pricing only comes into play when the company’s pricing strategy is aimed at removing competition with the intention of raising prices later on. It’s also worth noting that Amazon is still a small piece of the total retail pie, with retail sales of ~US$200B, of which US$106B is estimated to be in the U.S. in 2018. Figure 2 compares Amazon’s U.S. retail sales with those of Walmart, Kroger, Target, and Costco. 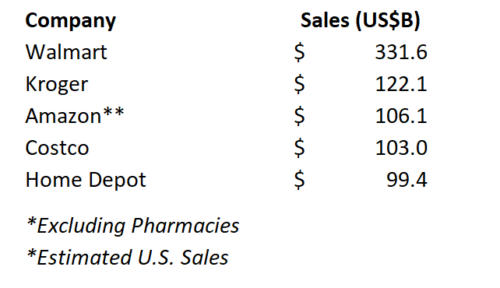 Like Apple, there are likely antitrust concerns around Amazon’s marketplace owner/participant relationship. Amazon has previously undercut its own vendors by offering similar products at lower prices to end consumers, a potentially concerning activity. However, the onus would be on the FTC to prove Amazon has the intent to monopolize. Amazon would likely need to be the sole seller of certain products not readily available from other retailers to pursue charges under antitrust laws.

More fascinating will be the ruling around a marketplace for a web-based service. Unlike Apple, where an app must be listed in the app store to be purchased on an Apple device, third-party online retailers can sell through multiple other websites (such as Walmart’s website). If sellers are unhappy with Amazon’s marketplace, this should lead to the rise of other prominent online marketplaces. In practice, this has started, as Amazon competes with the e-commerce sites of many traditional retailers (Walmart/Target/Costco), specialty retailers (Nike/Foot Locker/Bed Bath & Beyond) and other marketplace sites (eBay/Kijiji/Etsy/Wayfair).

Our take: As more and more companies invest in building online sites, we are seeing shifts towards a hybrid physical retail/online model. The future retail landscape is still being shaped and it remains too early to determine how it will play out and who will be left standing. We believe the consumer benefit from Amazon is real as the company continues to raise the bar service-wise and lower prices across a variety of goods (not to mention its creation of jobs). It is possible, with Amazon’s wide-ranging reach, that regulators will find some undesirable business practices that it will be pressured to change along certain product lines, but we do not anticipate major changes as Amazon’s business model remains good for consumers.

We believe these two companies are facing similar regulatory pressures, although we find it odd that different regulatory bodies are conducting investigations into them.

Alphabet is a tricky company to evaluate from an antitrust lens because it dominates several product lines: internet search, internet maps, and YouTube. The caveat is that all three services are ad-supported and free for use from a consumer perspective. Critics argue that consumers provide their data as well as content (in the case of YouTube) without compensation, but it is common for almost all websites to collect user information.

As well, Google’s market positioning (Google is Alphabet’s largest subsidiary) is user or demand-driven. There are many alternative search engines (Bing, Yahoo, DuckDuckGo, etc.) and all are easily accessible.  Thus, while the company certainly does have a monopolistic-like market share in search, it is a difficult area to regulate without harming the consumer. With YouTube and Maps, the company has two additional properties that it can leverage from its search results. However, it is difficult to see how these properties, which are free to use, harm consumers. Google has invested heavily in Maps, with features like street view and live traffic (as well as directions). YouTube similarly provides free content and has helped businesses and industries reach consumers in a low-cost way (for example, the music industry enjoyed a resurgence of music videos and a new way to monetize music).

Similarly, Facebook is a free service, including its other services Instagram, WhatsApp, and Facebook Messenger. The company also competes with Alphabet’s YouTube, with Facebook Watch and Instagram TV. Other competitors in social media include SnapChat, Twitter and TikTok. Depending on the market and the measurement (engagement, downloads, daily active users), Facebook’s apps independently rank highly but are not necessarily the top app in a category.

Both sites have certainly faced backlash as a tool used to interfere in the societal structure, such as election interference or terrorist radicalization, and some studies have shown social media can have a negative effect on mental health. Facebook has dedicated a large team to monitor and clean up its site, and new Global Data Protection Regulation that came in force in the European Union in 2018 provides a roadmap for data privacy that will likely be rolled out to the U.S.

As both Alphabet and Facebook rely on advertising, steps to reduce usage/engagement could negatively impact both companies. However, unlike Apple and Amazon, which compete directly with third party competitors on their own platforms, Facebook and Google simply compete for advertising dollars. Advertising is a large market, and while Facebook and Google’s strong data availability means they can better target clients, combined they represent only a portion of the market. As shown in Figure 3, Search, Social and Other Digital, still represent less than half of advertising globally. Facebook and Alphabet own a large chunk of that market but as other competitors emerge, their dominance in these categories should be reduced. 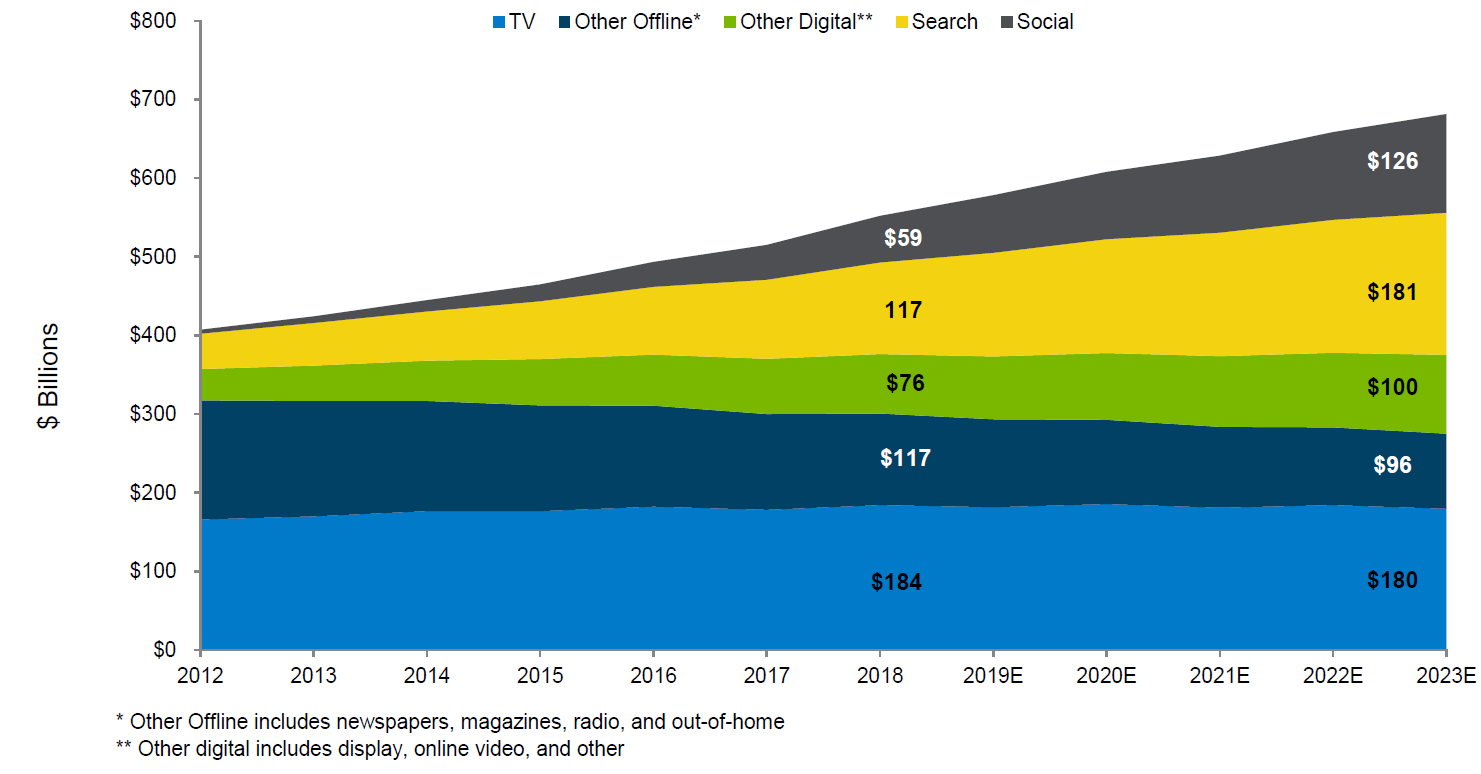