A Message from Our CEO, Bruce Murray

Over my career, I have witnessed almost a dozen selloffs of 20% or more, which is about one every 3-4 years. Of these, the following are remembered:

Of the above examples, the 1980-1982 downturn was the one that scared me the most. We were hostage to OPEC, inflation was rampant, already high, and rapidly rising, interest rates were devastating to both businesses and consumers, bankruptcies were widespread.

As shown in Figure 1, the S&P 500 Index dropped almost 30% over 18 months. There appeared to be no way out, but the increase of fuel efficiency and Federal Reserve’s Monetary Policy brought about positive changes. In August, at the peak of despair, investors launched a great bull market, taking the market to new highs 3 month’s after the early-August bottom.

Other notable sell-offs were based on Central Bank actions to slow the economy, cyclically induced market sell-offs or some, like the ferocious flash crash of 1987, were driven largely by human emotion and an inability of then-current market mechanisms to deal with an onslaught of early computer-based trading of derivatives.

The markets have usually recovered within a relatively short time period from most of these events; witness the rapid recovery a year ago from the 4th quarter 2018.

Major economic downturns, on the other hand, have resulted in declines that have lasted several years. The worst of these being the period of the Vietnam War and the rise of OPEC where the market P/E fell as interest rates rose to discount inflation. It only ended with the rise of oil production outside of the Arabian Gulf and the massive deflationary actions of the US Federal Reserve squeezing inflation. The market went nowhere from 1966 until the breakout in 1982.

While we realize the current situation is something we in the West have not witnessed for over 100 years, we expect the major economic damage will be largely limited to the travel and retail sectors. The economy is no doubt in a recession and many smaller retail establishments such as restaurants are being buried, potentially leading to closure and the end of their owners’ dreams.

Markets may remain unsettled until we are clearly past the peak of the virus, but once we are, air travel will resume, and economic activity will rebound quickly. The ageing demographics of the West, lower oil prices, and the technological boom will keep inflation at bay.

The current selling is broad and ETF dominated. Even Healthcare companies are selling-off.

I expect markets will recover the lost ground and move to new highs within a couple of years. At current prices, the S&P 500 is selling at 16X this year’s already lowered earnings. This is a great price to buy considering that the price-to-yield in the long bond markets represents a P/E equivalent of 64X on the 30-year bond and much higher on shorter durations.

The Murray Wealth Group is participating in social distancing and has closed its physical office until Health authorities suggest otherwise. We are working remotely and, as always, will continue to be available via phone and email should you wish to reach out to us.

A Commentary on COVID-19 in the Market

We believe the COVID-19 epidemic will peak in mid-April and improve through summer. Markets are pricing in a significant economic slowdown in Q1-Q3 2020 with a view towards improvement in the second half of the year.

The volatility and sharp equity drawdown over the past month are essentially unprecedented — we need to look forward in order to forecast future equity returns.

Looking back to 2008, we see a similarly sharp drawdown on a large macro event. There were two phases to the drawdowns, the first from Sep 19-Oct 10, 2008, and then another sharp fall through Nov 21, 2008. Markets started to recover afterwards before a final, slower drawdown at the start of 2009, but we believe this was due to massive pension asset adjustments. If we believe 2008 is the closest analogy to current economic events, we have now seen the bulk of the initial drawdown.

The Coronavirus is having an impact on the economy and social distancing is necessary to help governments and healthcare authorities manage. At some point, adequate capacity and methods for treatment will exist, a vaccine will be found or the virus will pass through enough of the population to provide some baseline immunity (as in the 1957 and 1968 pandemics).

Investing During Corrections: the Final Capitulation.

When stocks start discounting the zombie apocalypse… you know we are very close to the bottom.

History has shown time and time again that excellent returns are made when one invests during times of extreme duress. We are in one of those times (see Exhibit 3). We would argue the trough has come MUCH faster this time. 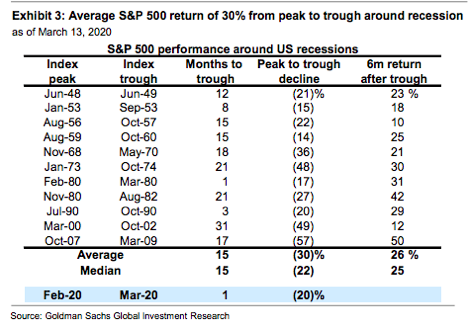 What does this mean for you.

If you have cash on the sidelines because you thought the markets were peaking, now is the time to invest.

Since no one can pick the bottom, we recommend a layered approach.  Divide your investable cash into 3 tranches and invest over the next 2-3 months.