This is the Twelfth in a series of independent research produced by the Murray Wealth Group Research Team. The purpose of this series is to provide insight into our portfolio construction and how our research shapes our investment decisions. We welcome any feedback or questions you may have on these monthly commentaries.

Aritzia is a Canadian women’s fashion retailer positioned at the upper end of the mass consumer market. The company has a strong footprint in Canada with 67 locations, and a growing presence in the United States with 25 stores located in both shopping centers and other urban shopping destinations. Aritzia designs and sells exclusive inhouse brands, including TNA, Wilfred, and Babaton, and carries select products of leading designers such as Adidas. The company enjoys high satisfaction amongst the coveted 20-40 year-old women’s demographic. It is positioned above larger fashion retailers like H&M and The Gap but well below European luxury designers in terms of price, brand perception and quality. We believe Aritzia is a best-in-class fashion retailer, with a long runway of growth in the United States, trading at a reasonable valuation.

In 2007, Lululemon (LULU) went public on the TSX and NASDAQ at US$18. The shares soon reached as high as US$60, despite the company earning US$0.46, for a P/E ratio of 100x give or take. At the time, LULU was embarking on a significant expansion as the company needed to establish its first mover advantage in the burgeoning athleisure market it pioneered. The company grew from 51 locations in 2007 to 81 a year later. Stores continued to pop up in new markets as the athleisure look became more prominent for both fitness and casual wear. Today, LULU has over 440 locations globally including 64 in Canada and 285 in the U.S. The shares are now trading above US$160.

We believe there are some parallels that can be drawn between Aritzia and Lululemon. There is likely a lot of overlap in their customer base (although Lululemon also sells men’s clothing), with customers of each willing to pay a premium price for a higher quality product. This demographic overlap is significant for the purpose of determining how big Aritzia can eventually become. Consider the following additional similarities:

Taken together, these points highlight what LULU’s growth can tell us about Aritzia’s probability of success. If Lululemon and Aritzia have similar store footprints in Canada and a similar customer base, then demographics would suggest that Aritzia could replicate LULU’s success in the United States. Aritzia actually has more stores in Canada than Lululemon, and considering that Aritzia’s stores are twice as large (6,000 vs 3,000 square feet), its real estate footprint in Canada is twice as large. It also proves that a Canadian brand can be successful in the U.S. without resorting to the novelty of Canada (such as Canada Goose and Roots). Lululemon’s success in the U.S. and Aritzia’s early success there (in FY19 Aritzia’s U.S. revenue grew 36%) indicate that Aritzia should be able to continue to grow its store count significantly.

As noted above, both companies also have the luxury of selecting the proper real estate for brand and demographic purposes. The “Retail Armageddon” caused by changing consumer tastes and online shopping has left many brands overstored and some shopping centers half-empty. This is providing both companies with an ample supply of choice locations. This will continue to prove more important over the next decade as the retail market continues to shift.  Simon Wolfson, CEO of NEXT PLC (the British multinational retailer), penned a telling letter to shareholders in which he indicated that online shopping, with its low barriers to entry, will continue to cut market share of traditional retailers whose prime real estate locations acted as their primary barrier to competition.  Aritzia has focused on high traffic locations and often times looks to expand an existing store rather than open an additional store in the same market. It’s likely Aritzia will find more prominent locations to maintain its touch with customers.

Finally, similar to Lululemon, Aritzia is benefitting from e-commerce.  While Aritzia does not break out e-commerce, it is likely that a meaningful portion of its 3-year comparable sales growth of ~26% was driven by-online sales weighted to the U.S. market (where Aritzia’s store footprint is still small). Moving forward, this should be further augmented by increased efforts by social media sites such as Instagram to enhance shopping capabilities, providing additional digital points of sale for Aritzia. Notably, Aritzia currently has nearly a quarter of the Instagram followers as Lululemon (600K for Aritzia, versus 2.4M for Lululemon) despite being only one/tenth of Lululemon’s size on a market cap basis.

Often, we are skeptical of fashion companies as the ever-changing tastes of consumers ebb and flow. It harkens back to the funny Seinfeld bit where the female lead character, Elaine, believes she is dating a man with partial African-American heritage (the man believed she was Hispanic). After learning that they are both in fact Caucasian and therefore not an inter-racial couple (“so we’re just a couple of white people?”), she asks if he wants to go to The Gap, at the time the most popular store for affluent white people.

Today while The Gap (for clarity, we are referring to the standalone brand not the parent company that includes Banana Republic and Old Navy) still has strong distribution presence across North America, it is far from the top fashion retailer for young, urban professionals. Since 2010, The Gap has closed 385 locations in North America and Europe, over a third of its locations, yet comparable sales from the remaining locations (logically, their best locations) are still down ~10% over a three-year period. It is always hard to predict fashion trends, but The Gap, known for its preppy shirts and khaki pants, simply has had fashion trends move against it.

We believe Aritzia is more immune to fashion risk than other retailers due to its multi-brand strategy. Aritzia’s stable of in-house brands provides Aritzia with the ability to grow or shrink a brand’s real estate in a boutique as fashion changes and/or even create new brands if fashion trends move in a new direction. More clearly, there is no Aritzia-branded clothing; Aritzia is the destination to buy brands such as Wilfred, Babaton and TNA. In addition, it layers in its in-house brands with select 3rd party brands. The result is a nimble, effective strategy that reduces the risk of obsolescence.

A second advantage of Aritzia is design differences in each location. While some brands are proud of creating an identical experience regardless of location, Aritzia strives to provide a similarly strong, but unique feel in each of its locations.  Retailers are learning that the physical touch point with consumers remains a vital attribute of a successful retail experience and that controlling a consumer’s experience with the brand can be leveraged into new customer insights. Two recent examples are Nike’s shift to a direct-to-consumer model (more Nike stores and e-commerce investment versus wholesale) and Amazon’s continued expansion into more traditional retail models. 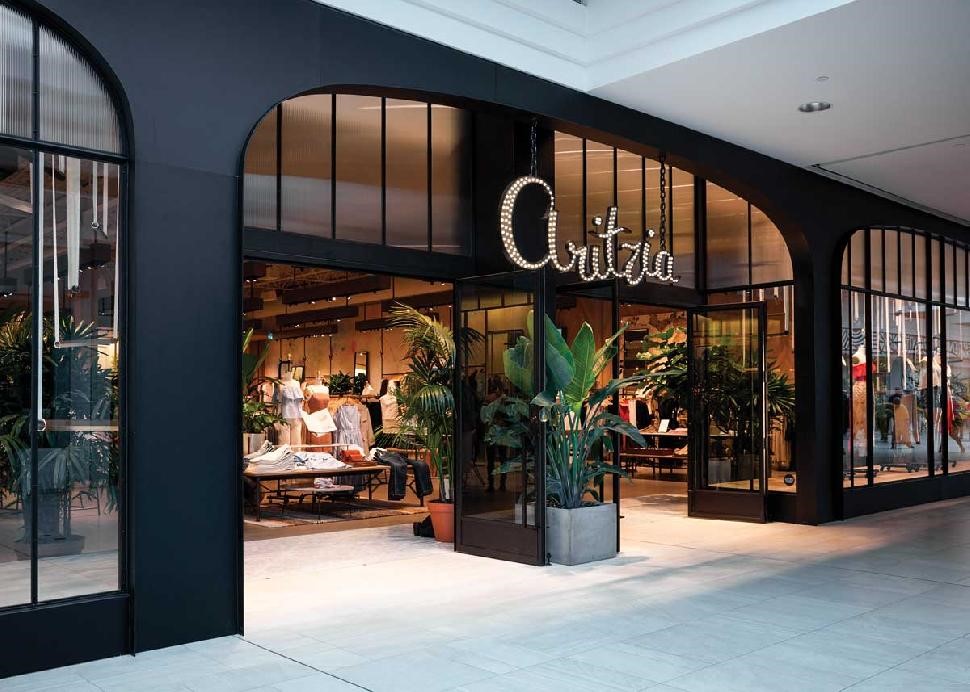 We are most bullish on Aritzia’s growing U.S. presence. The company has 25 locations, although currently those locations are mostly located on the West Coast.  The company has 12 stores from Seattle to San Diego, with the remainder mainly in Chicago (5) and New York City (5). This leaves ample room for growth, with the potential of blue sky grow in major markets. As Aritzia’s brand recognition grows in the U.S., it can more profitably add locations on an infill basis. For example, while St. Louis, MO, with a 2.5 million metro area population, could easily support multiple locations, the company can open in much larger cities such as Phoenix, Miami and Houston before looking at 2nd and 3rd tier cities, effectively de-risking its investment in distribution.

Unlike Lululemon, Aritzia is growing its store base at a very measured pace. Lululemon, as the category leader in athleisure, needed to grow its store base and brand as quickly as possible to maintain leadership in the newly created category. Aritzia on the other hand, is looking to grow in the well-established women’s apparel market, where missteps or strain on its infrastructure could prove more costly over the long term. We also believe Aritzia wants to maintain a strong level of profitability and balance sheet strength, which is always a trade-off for near-term growth. This financial wherewithal was beneficial when its former private equity ownership group decided to exit their stake in February as Aritzia was able to purchase a large tranche (6%) of its outstanding shares, which helped the market digest the deal.

In FY20, Aritzia will add 6 stores to its U.S. platform and expand 3 stores in Canada. If we assume it will add 6-7 stores per year in the U.S., the company will have ~60 stores in the U.S. by 2024, with a still long runway of growth towards upwards of ~200 locations. The company will announce a new 5-year plan in 2020, which will provide an indication of how fast the company will grow going forward.

Aritzia trades at just 17x FY21 earnings (its fiscal year end is February 2021), an attractive price for a company that has strong visibility of mid-teens earnings growth for the foreseeable future and a customer base that bridges millennials to Generation Z. Peers such as Lululemon and Canada Goose trade at higher multiples (31x and 33x) for a slightly higher growth rate (closer to 20%) but with a riskier growth strategy or more limited product line.  Should Aritzia aim for a slightly higher growth rate in its next strategic plan, it could trade at a mid-20s multiple.  Whatever road Aritzia’s management takes (Founder Brian Hill remains at the helm of the company with voting control), we believe there is tremendous value in the company at current levels.