This is the Tenth in a series of Independent research produced by the Murray Wealth Group Research Team. The purpose of this series is to provide insight into our portfolio construction and how our research shapes our investment decisions. We welcome any feedback or questions you may have on these monthly commentaries.

The Global Automotive sector is a complex web of original equipment manufacturers (OEMS for short; Ford, Nissan, Tesla), suppliers and of course, customers, mostly retail, but also including trucking companies, rental car services and other commercial vehicle applications. Tangled into the physical asset chain is the financial aspect of lease/financing transactions, which have their own set of complexities.

The sector has seen major disruption throughout its history, starting with the introduction of assembly line manufacturing a century ago…..to the rise of Japan, Korea and now China in automotive production…..to an ever-increasing use of computing/technology. This report will outline where we stand in the auto cycle and how new disruptors will affect the investment landscape and opportunities, we see for good investment returns.

Figure 1 below provides passenger vehicle sales globally including estimates for 2019-2021, courtesy of Morgan Stanley. The prevailing narrative in the investment world is that we are at an all-time peak in auto sales and should expect a gradual decline from here. The forecast below does not dispel this viewpoint, with global auto sales stagnating through 2021 despite a healthy global GDP outlook. There are lots of numbers in the chart, but let’s zero in on the key numbers and factors we think investors should focus on. 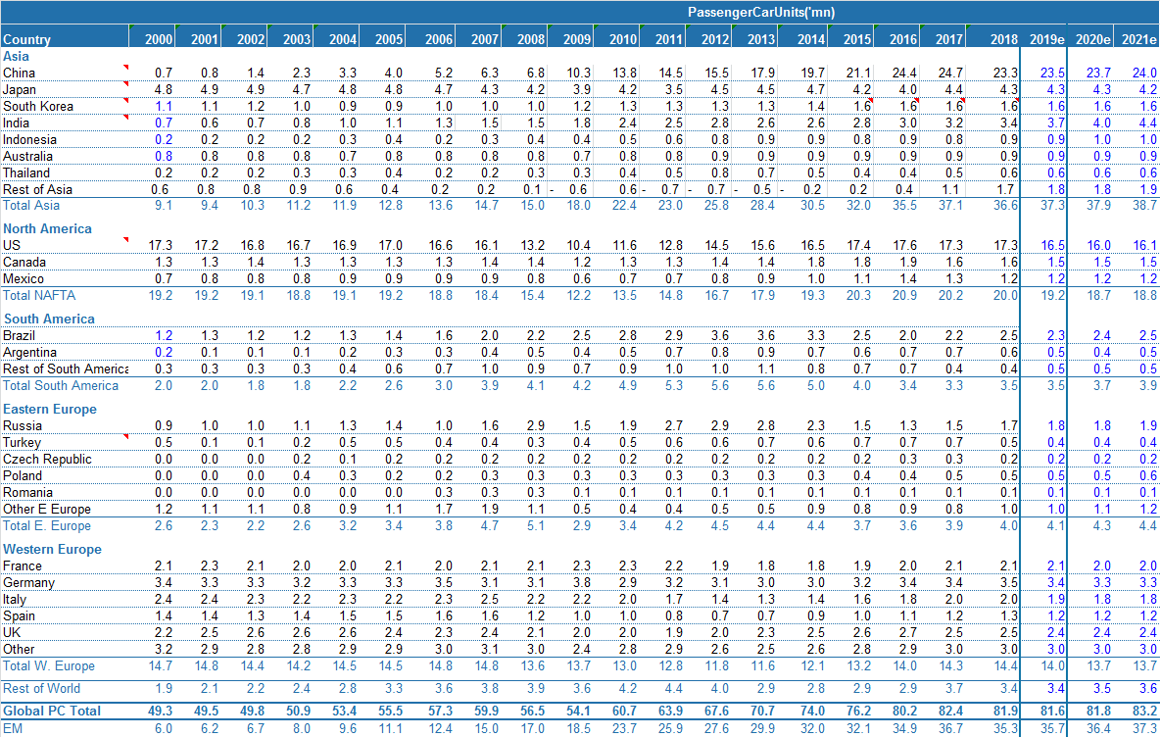 North America and Western Europe sales (40% of global demand) have peaked. Sales have rebounded since the 2008/09 financial crisis but have flat-lined in recent years. The weakness in sales is expected to continue through the forecast period. Why have auto sales topped out despite a very strong North American consumer? Cars are lasting longer and thus the fleet does not need to be replenished as quickly. In addition, increased urbanization and ride-sharing services are dampening demand from millennials (We’ll touch on these later). Figure 2 provides Morgan Stanley’s estimate for North American demand under three different scenarios. 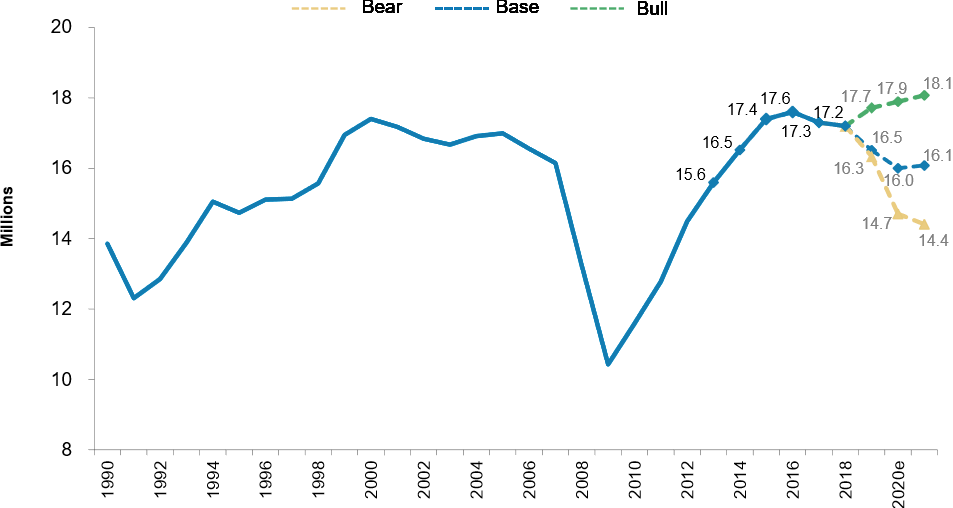 The way we use cars has not changed much in the last 40 years. Of course, new design has improved aesthetics, performance and mileage while new features like back up cameras or lane departure sensors are making vehicles safer to operate. But a peek into the next decade could unveil a drastically different car market. We’ll highlight the two most significant changes.

Electric vehicles. Imagine never having to stop for gas again. Imagine an affordable car going 0-60 mph in 4.6 seconds. Imagine quieter streets, even during rush hour. Yes, electric vehicles (EV) have limitations, notably total driving range (current models range from 150-500 km) and lack of infrastructure.  However, it’s not hard to imagine a future where electric cars are the dominant vehicle at least in major cities where driving trips are short and charging stations/electricity supply should be readily available. The next three years should see significant growth in the number of EV models available from all automakers, driving increased adoption by consumers and forecasts by the International Energy Association call for sales of 11 million EVs in 2025 (from 1 million in 2017), rising to 30 million in 2030. Just last week alone, Volkswagen announced a goal of selling 22 million Volkswagen EVs by the end of the next decade. It’s likely that a combination of government regulation and changing consumer demand lead to significant growth.

When looking at the stock prices of global automakers, it becomes clear that the market is valuing the potential of electric vehicles quite highly.  Tesla, the leader in EV sales, trades a very large premium based on enterprise value (defined as market capitalization plus net debt) per vehicle produced. The numbers are not perfectly comparable owing to differences in profit per car and fact that larger automotive companies have other divisions included such as other equipment and finance arms, but the valuation gap is nonetheless significant as can be seen in Figure 3 below.

Figure 3: Tesla’s enterprise value per car produced (2018) highlights the expectations for its growth versus that of traditional automakers. 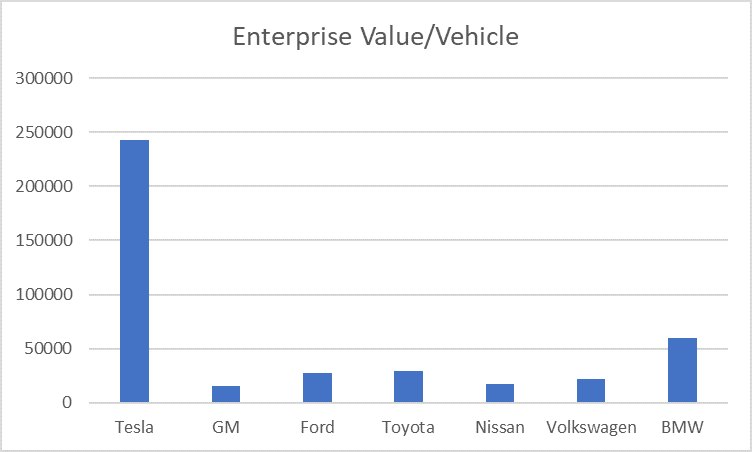 Tesla currently dominates electric vehicle sales, but over time its value will depend on its ability to maintain a strong market share in the face of an onslaught of competition. But that is an analysis for another day! Focusing on the matter at hand, companies throughout the value chain need to have an answer to this shift to electric vehicles.

Autonomous Driving potentially a mecca of value. In the sharing economy we are already seeing millennials and other urbanites shun driving either due to cost (car + gas + parking +insurance) as well as convenience (parking, maintenance, refueling, etc.). Ride-sharing services (most popularly Uber and Lyft) are expanding rapidly with both companies set to complete their Initial Public Offering this year. These ride-sharing services essentially replace taxi cabs and can operate at lower rates due to a) unlimited supply (almost anyone with a vehicle can be a driver), dynamic pricing (uber is more expensive on New Year’s Eve than New Year’s Day) and, most importantly, the ability to take on nearly unlimited losses. According to website CrunchBase, Uber has raised over US$24B while Lyft has raised over US$5B. Every time the ride-sharing services complete a trip, they lose money. Thus, the bigger they become, the more money the companies lose. Seems like a losing proposition….

And it is, until your largest cost, drivers, can be eliminated. Uber and Lyft are in a race to grow their market share over the next decade, by which time Autonomous Driving (AD) is expected to begin infiltrating cities. Pilot projects are ongoing in certain sunbelt cities where weather is predictable, and streets are wider (the vehicle are accompanied by a “driver” that can take control of the vehicle at any time). Google’s WAYMO division is viewed as the market leader, but many companies are investing/partnering in this potentially game-changing technology. If AD can be safely commercialized on a wide scale, the implications would be far reaching. Fewer vehicles would be needed in total (as vehicles could be used continuously), parking would be more abundant, will decline sharply and drinking/texting while “driving” may be permitted.

Google – Our largest position in the Global Growth Fund is in Google. The majority of Google’s revenue and earnings come from internet advertising. However, research analysts are starting to ascribe significant value to its Waymo autonomous driving platform, which is likely the most advanced in the world. In August, Morgan Stanley valued Waymo at US$175 billion (yes, billion) while UBS was more conservative, valuing the unit at US$25-135 billion. Recent news reports indicate Google is looking to raise outside funding for Waymo, which would provide a more solid valuation data point. Either way, if autonomous driving technology can be perfected (and it will need to be) and Waymo can hold on to its leadership, Google would have a significant new revenue growth driver that could be hugely impactful on a company of its size.

BMW – BMW’s shares have been weak with the softness in global auto demand (in Europe in particular), the European diesel emission scandal as well as trade/tariff concerns with selling vehicles into China (its popular X3 is built in South Carolina and faces tariffs currently). We, however, like the stock. The valuation is at the bottom of its historical range and we believe that BMW has significant premium brand value that is not being recognized in its share price. BMW is also a leader in electric vehicles and will have five EVs on the market by 2021, growing to 15 by 2025 (25 including hybrid vehicles). In 2018, the company sold 142.6k electric vehicles (mostly plug-in hybrids), 38% more than it sold in 2017.  As a best in class manufacturer, we believe BMW is well positioned to meet the changes in the auto sector.

Linamar – Linamar is a diversified manufacturer with its roots in the auto sector. Among its largest revenue sources is the manufacturing of gears and other powertrain components for OEMs. It has a growing industrial division that produces lifts such as scissor lifts and tele-booms and a recently acquired agriculture products arm. Despite concerns about the future of the internal combustion engine, Linamar continues to grow, with new business wins as OEMs outsource more complex power train component manufacturing to specialty companies like Linamar. Thus, it has grown its auto parts business much faster than the industry historically.

Investor concern surrounding gasoline-powered vehicles has led to its shares trading at an extreme discount to historical averages and most other stocks, despite ongoing revenue and EPS growth and a strong balance sheet.  Linamar continues to see large market opportunities in all types of vehicles. The company is winning new work on electric vehicles, with programs launching in 2021. Linamar believes they can win up to $300 of componentry per electric vehicle, which is almost twice what they currently have in North America.  Management will need to navigate its way through the challenges and opportunities facing the auto industry, but the valuation is too cheap to ignore. Linamar sells at a P/E of just over 5x and well below its $58.19 book value per share.