Thoughts on the Market: January Edition

We now have a new worry in the financial markets, with the World Health Organization deeming the outbreak of the Wuhan Coronavirus as a Global Public Health Emergency. There is still much unknown about the virus and its ultimate effects on the economy. What we do know currently is that Chinese economic growth will be impacted, and thus, revenue and profits of companies with operations in China and those selling into the country will be affected. For example, both Apple and Nike have closed all their retail stores in China. Cyclicals and industrials will be impacted as well, with airlines and cruise lines cancelling trips. China’s oil consumption is down 20% as factories suffer and in-country transport is limited.

Looking at past viral pandemics is only marginally helpful. The Coronavirus case count already exceeds SARS, although it appears to be much less deadly (the official mortality rate of SARS was almost 10%). The H1N1 outbreak in 2009/10 is likely a better example, with millions infected worldwide but with a very low mortality rate. With potential treatments being tested and case counts still being confirmed, it will likely be a couple more weeks until there are more definitive viral parameters. 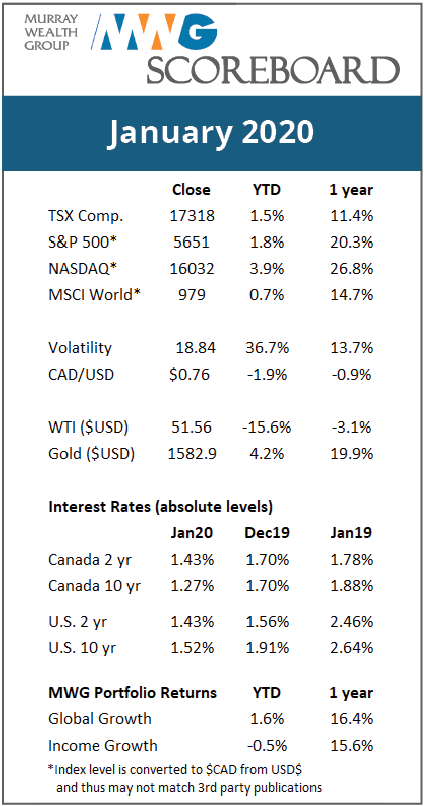 Until then, we expect additional volatility in the equity markets. Prior to the news of the outbreak on January 17, the S&P500 had risen about 3%.  However, it subsequently gave back all of that gain by month-end (thanks to a similarly fated Canadian dollar, the index rose 1.8% in CAD terms). The NASDAQ and TSX fared slightly better, rising 3.9% and 1.3%, respectively, in the month. WTI oil prices plummeted 15% on the Chinese buyers’ strike and news that U.S. oil supply is climbing faster than anticipated.

We had expected 2020 to be a noisy year with the U.S. Presidential election coming into focus. The coronavirus adds to this uncertainty. If the outbreak is contained and peters out in three months, the direct financial hit to financial statements and economic growth should be mild. The tail risk is a worsening of current viral indicators leading to extreme caution with regard to global movement and human interaction.

We are selectively rebalancing names where we believe the market has over-reacted to the present market risks.

The  MWG Global Equity Growth Fund  returned 1.6% in January, aided by our holdings in the technology sector and the falling Canadian dollar. Standout performers in the month included Aritzia (up 31%), followed by technology incumbents Amazon, Microsoft, Alphabet, IBM and Netflix (up 6-9%). We have talked about why we like the tech sector in past months but would like to focus on another favourite this month: Health Care. We made a relatively large shift in our health care weightings: taking profits and weighting out of Ely Lilly and redistributing the weight to other health care names that have underperformed.  Our thoughts on each name are as follows:

Ely Lilly (LLY.N) – Shares are up 28% from summer 2019 due to optimism on the company’s upcoming diabetes/cardiovascular disease drug pipeline. With shares trading at 21x P/E, we believe the stock has reached an appropriate valuation. We reduced our target weighting to 1.5% from 3.5%.  Our purchases were made at an average cost of US$111 starting in October 2018, for a 27% gain based on a US$141.53 sale price.

Boston Scientific (BSX.N) – Shares sold off after the company missed Q4 growth expectations due to a variety of factors. However, the company is entering a phase of significant increases in free cash flow and, with that, the option of pursuing acquisitions, a strategy that has proven successful historically.  We raised our weighting to 4.0% from 3.5%.

Gilead (GILD.O) – Gilead is a leader in anti-viral drugs to treat HIV and Hepatitis. Its cash flow from current drug sales is strong, but it needs to demonstrate some development success for when the patents on current therapies expire. There is some optimism that its existing drugs may treat the Coronavirus, which could result in a multiple expansion if investors believe that an existing drug cocktail may have use for future viral pandemics. We raised our weighting to 3.5% from 3.0%.

Pfizer (PFE.N) – Shares sold off on weak Q4 profit. However, the company was bullish on long-term revenue growth at a recent conference and will likely formalize guidance at the upcoming March 2020 Investor Day. We raised our weighting to 3.5% from 3.0%.

Intuitive Surgical (ISRG.O) – The company has a massive lead in robotic surgery, a minimally invasive form of surgery that is still in its infancy. Competition concerns have pressured shares but with such a large potential market, we think have a multi-year growth runway. The shares are expensive at a 42x P/E multiple, but the company’s long-term growth outlook is impeccable. We raised our weighting to 1.5% from 1.0%.

The MWG Income Growth Fund rose 1.4% last month and returned 25.9% for the year. On the last trading day of November, we purchased a 1% weighting in Cineplex. The shares were the top performer in the Fund, rising 36% after the company received an all-cash takeover offer from Cineworld at $34 per share. We will hold the shares through February on the possibility of a competing bid.  Regardless of whether another bid emerges, we will receive dividends through that month. We also raised our target weighting on Capital Power and Intertape Polymer.

To fund our purchases, we sold our position in Automotive Properties REIT as the REIT market appeared fairly frothy and the shares approached our target price. Longer term, we have concerns around auto dealerships despite currently strong profitability. We also sold just under 20% of our large Power Financial holding to re-balance our position when the shares rallied on a proposed re-organization.