Thoughts on the Market: October Edition

Where we were wrong on tech and the path forward.

Our position at the beginning of this year was that mega-cap technology companies would be relatively insulated from the economic effects of 2022. As we wrote in our 2022 Outlook, we were of the opinion that revenue would still increase off a large base after accelerating through Covid. Moreover, we felt that capital spending could be reined in on low-priority projects, allowing sufficient free cash flow to support stock prices through share buybacks. As well, valuation multiples were in line with the prior decade, and we felt that balance sheet flexibility would act as a buffer to weather any downturn.

Ten months later, the mega-cap tech stocks have had their worst quarter in recent history (excluding Q2/20 at the onset of the Covid lockdowns). What happened? A mix of macro-economic and sector factors have led to slower than anticipated revenue growth.  These factors included a pull back in spending from eCommerce companies that are finding growth a challenge as economies reopen, a very weak European market, weakness in advertising in certain sectors like financial services and autos and a surging US dollar. Overall revenue growth for the group (which include our Global Equity Growth Fund holdings Alphabet, Microsoft, Amazon, Meta and Netflix) averaged 11% through the first nine months of the year, not bad considering FX headwinds (constant currency revenue growth was 13% on average in Q3/22) but below expectation of 17% growth at the start of the year.

Short-term revenue trends are largely beyond a company’s control, but we believe that most companies will need to contain expenses and capital spending before shareholder returns improve. Despite the increase in revenue, margins fell 1% on average, with Amazon, Alphabet and Meta experiencing larger declines. This is mostly due to higher costs in the areas of research and development and G&A overhead to support a larger asset/employee base. On top of the higher operating costs, capital expenditures also increased by 18% across the group to US$120B in 2022 from US$102 last year (representing 14.5% of revenue vs. 13.8% for the 9-month periods).

It’s common for there to be some lag in cost reduction as revenue growth slows, but investors have taken issue with the lack of urgency these companies have shown in improving their margins. Both Alphabet and Meta Platforms are seeing operating and capital costs increase into year-end, which will keep 2023 margins under pressure. While Amazon has been more active in reducing costs by reversing some investments in industrial real estate, it will take a couple more quarters or an acceleration in the eCommerce spend to produce an improvement in margins given that it doubled its fulfillment capacity over the past two years and continues to invest heavily in AWS. Netflix and Microsoft did not see expenditures increase as quickly but are dealing with a slowdown in revenue growth all the same.

We believe the companies are slow to adjust their expense base for two reasons.

First, they can afford it. The companies will still generate a combined US$140B in free cash flow in 2022, a healthy level considering the cash outlays and weak end markets. Additionally, balance sheets are strong, with only Netflix and Amazon having small amounts of debt and Google, Alphabet and Meta sitting with close to US$180B in cash.

Second, there is certainly an aversion to laying off staff, given the staffing challenges most technology companies have experienced during the past two years. Many companies froze hiring in 2020 and have just rehired staff to work on long-term projects. While companies have indicated they may freeze hiring (and let their employee base shrink through attrition), at this point, the pressure to abandon long-term growth projects is not high enough to do so.

*We may be near that point as indicated by reports that Meta may layoff ‘thousands’; as a rule of thumb, using a cost per employee of $200,000 equates to $200M in reduced cost per 1,000 headcount reduction).

These companies have outperformed over the past ten years given their ability to win in large markets and leverage new products over their user base. This strategy has paid off handsomely, with free cash flow growing strongly over the past decade (Figure 1). Analyst forecasts call for continued growth in free cash flow for the group through 2025, given the companies’ leadership in growth markets like digital marketing, cloud services, social and media. We will be detailing the future of these four markets in our mid-month research piece. 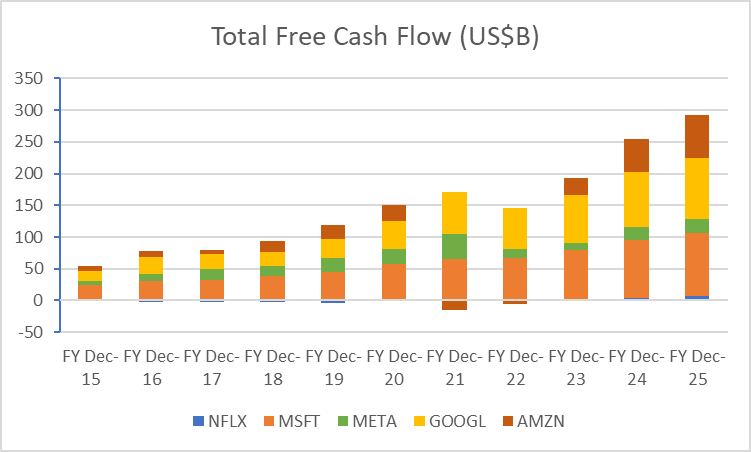 Although we made no portfolio additions or deletions in October, on November 1, we sold our position in Twilio for $74/share as weak cloud revenue from companies like Microsoft and Google led us to believe that Twilio’s growth forecasts were overstated. We believe this is pertinent to highlight given the sharp subsequent fall in Twilio’s share price to $42 on the release of a weak 2023 outlook.

We made no portfolio additions or deletions in October.