The current trade war between China and the United States represents both a headwind for global economic growth and an overhang in the equity markets. A myriad of factors has driven the U.S. and China to this point, but there are two main issues that the U.S. Government is targeting: its large trade deficit with China, as well as concerns surrounding the transfer of intellectual property, state secrets and technology through espionage.

The U.S. current account balance has been persistently negative since around 1980 as can be seen in Figure 1 below. Given that the current account mainly reflects the balance of trade, it highlights the relative size of net imports when compared with GDP.  About half of the current account deficit is with China, while 20% is with the European Union and 10% is with Mexico. The U.S. is able to finance its trade deficit through its Capital Account. It’s able to issue treasury bonds based on its status as the global reserve currency (given that foreign governments and investors alike purchase U.S. Treasuries based on their liquidity and stability). This allows the U.S. Treasury tremendous leeway in financing its large deficits and the additional liquidity required for banking operations. 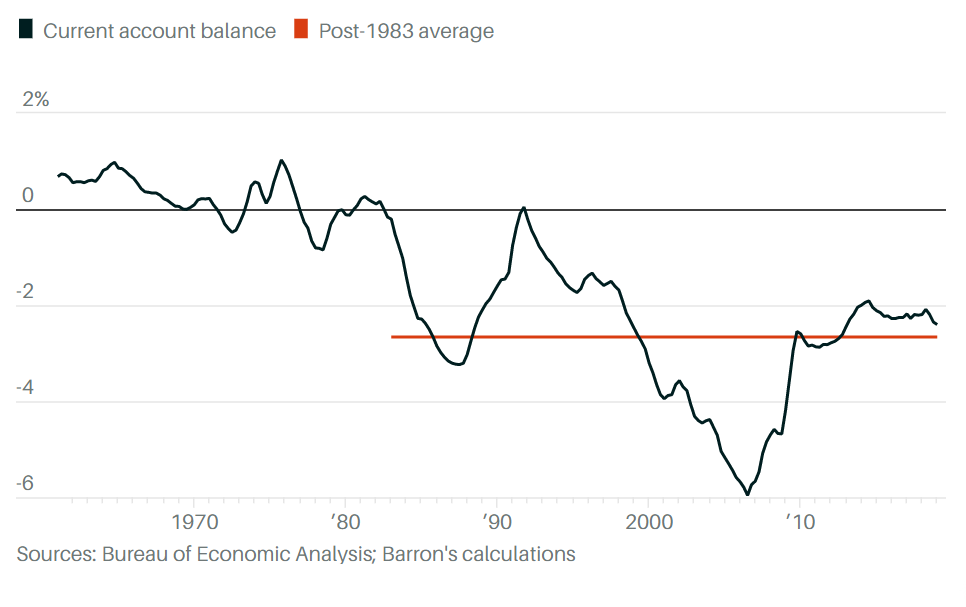 While China has been the largest beneficiary of U.S. Trade deficits, it has also been the largest holder of U.S. Treasuries, although its holdings peaked in 2011 (as can be seen in Figure 2 below) as the Chinese economy ultimately required liquidity injections to manage its slowing growth rate. China and the U.S. still have a symbiotic alignment in maintaining the U.S. dollar’s reserve status. Essentially, China has been lending to the U.S. to allow it to purchase Chinese goods. As a result, China has now been accused of hollowing out the manufacturing base in the U.S.

The second cause of the trade war surrounds Chinese efforts to acquire access to U.S. technology and trade secrets.  To this end, China uses a variety of methods, including cyberwarfare (using malware, cyberattacks, or the selling of hardware embedded with harmful software), and a network of spies (including civilians, businesses partnerships and academic researchers). While the cost of espionage is much more difficult to pinpoint (and let’s be honest, it goes both ways), China has much more to gain.

Each country has used various monetary measures to prop up their economies; China recently devalued its currency, while the U.S. has loosened monetary policy with its first interest rate cut since 2008. We believe the initial round of tariffs focused on products that could easily be substituted with products from other countries, and thus, U.S. consumers have so far been insulated from higher prices. However, recently announced tariffs come on products that are less easily replaced helps explain why Trump quickly reversed implementation until “after Christmas to help consumers”. Finally, it is unknown what proportion of goods is simply being re-routed from China through neighbouring countries for purpose of tariff avoidance (Figure 3).

Figure 3: Change in imports by country 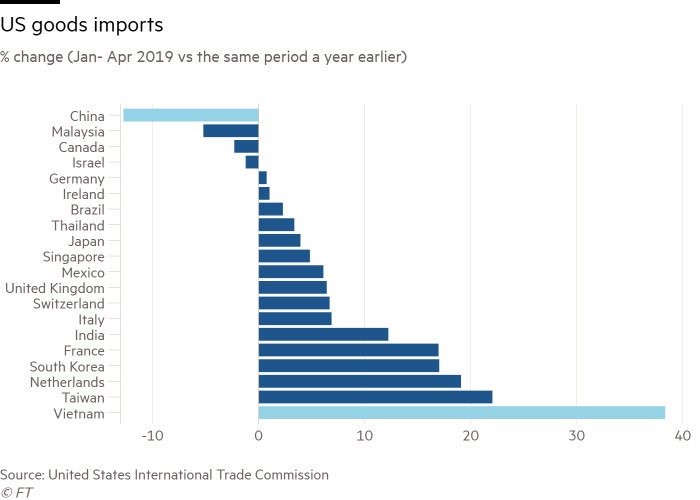 How do tariffs affect our portfolio?

Tariffs can affect our companies both directly and indirectly in two ways.  The tariffs can either squeeze margins or, if passed on to consumers by means of higher prices, reduce sales.

While it is difficult to build a completely tariff-proof portfolio (which could also lead to under-performance if a trade deal is struck), our Global Growth Fund holds a strong collection of companies that should not be directly impacted by tariffs.  Below we examine the top 10 holdings of the Fund, which collectively make up 41% of the portfolio.

Our three largest holdings all have little exposure to China. We estimate Google and Microsoft each have low single digit exposure in terms of revenue.  While industry sources estimate Facebook generates upwards of 10% of its revenue from Chinese advertisers, Facebook itself does not operate in China.

While neither company breaks out their exposure to China, we can deduce that their overall exposure is likely less than 10% of revenue given that OECD revenue makes up ~85% of revenue. Health care companies are looking to China as a future growth driver as the country raises its health care standards for its growing middle class, but China represents a small part of revenue currently.

With banking operations in Canada and the U.S., TD has limited exposure to tariff wars.

Royal Caribbean does offer cruise services in China and thus it could see weakness if the trade war impacts spending by Chinese consumers. However, it is not exposed to tariffs on its services.

Constellation Brands is the owner of Mexican beer brands Corona, Modelo and Pacifico as well as select wine (Kim Crawford) and spirit brands. As the company imports products from Mexico, it could be affected by ongoing trade disputes between Mexico and the U.S. (a situation that briefly arose in May of 2019 when the United States threatened Mexico with new tariffs before a resolution was reached).

Major credit cards can be used in major cities in China and thus Mastercard does generate service revenue from transactions that take place within its borders. However, Mastercard is currently not approved to issue credit cards in China, and thus most Chinese business would be in the form of tourist/visitor transactions only and therefore likely represent only a small portion of revenue.

Broadcom likely is the most exposed to the trade war mainly due to its exposure to Huawei, which accounted for roughly 5% of its 2018 revenue. The U.S. Government has isolated Huawei as a potential source of Chinese espionage and banned U.S. hardware companies from selling products to them. We believe that much of this is priced into Broadcom’s stock given that the company reduced its guidance mainly due to Huawei’s impact.

In conclusion, we believe our holdings are not particularly exposed to material risk in the event of an escalating trade war. In our view, the U.S. hand is substantially stronger than that of the Chinese as manufacturing has been rapidly moving to other geographies, which are even cheaper than China in many cases. China’s retaliatory moves against the U.S. mainly involve food related commodities. This will be hitting the quality of the Chinese diet, which is already being ravished by a major outbreak of African Swine Fever and likely raising food prices. The Party cannot afford to let this go on for a long duration. To put this in perspective, the U.S. exports some $15 billions of crop products annually. We believe a deal will be reached next year ahead of the U.S. election, thus we are prepared for additional volatility through the near term as more tweets are sent and trade headlines continue to fill the news cycle.